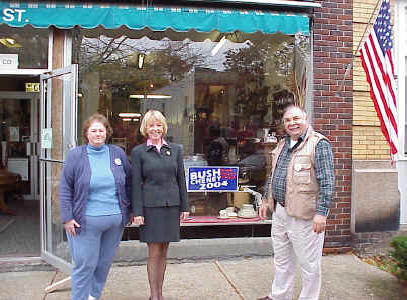 We were honored by the Lt. Governors' visit and by sheer luck were able to stand for a photo with her.

I asked her to convey my invitation to Governor Pataki to stop in and visit one of our Arms Fairs at the Saratoga City Center and show his support for our Second Amendment Rights of gun ownership and gave her a discount coupon for a reminder. I also asked if she perhaps would like to purchase any new guns for her New York State Trooper entourage but she respectfully declined. However, I did present the Lt. Governor with my card and reminded her Christmas is coming. Cathy and I both agreed that Mrs. Donohue is a class act and we thank you very much for the distinct honor and pleasure of your visit. And to Governor Pataki, our next show is this coming Halloween week end. We were advised that local NYS Assemblyman John Tedisco will be at our show on Saturday October 30 to show his support. But New York State Congressman John Sweeny has declined our invitation. We haven't heard from any other politicians other than that the Saratoga County Republican Committee will have a table there. We thank them for showing their support for our Second Amendment rights. The rest, oh well?

I hope all you great Republicans get out and vote on election day Tuesday November 2nd and to you good Democrats if you have to vote twice at least vote Republican once and don't you forget that you all should vote on Wednesday, November 3rd. Thanks to all. This Election is Getting Real Ugly

Recent discussions with some friends, which several are gun dealers, have surprised Cathy and I about some of the misguided views they hold on the coming election - one of the most important in recent history. The next President will definitely appoint one or more Supreme Court Justices for starters. The War on Terror will either be won right or not in the next few years. Our National image and integrity will be carved in the shifting sands of Iraq and probably Iran. Our American ideals will be tested. Can you voters just do this little test that I like to perform on my customers when they come in to my gun store and ask, "What kind of gun should I get for protection?"

I say, "Close your eyes and think that you are an intruder in your darkened house and you hear this sound ~ (The subtle and unmistakable sound of the sliding pump action of a shotgun slamming home a chambered round as I activate the mechanism.) ~ the sound alone is enough to send the critter scurrying with a chill in the spine."

I say now of this election, "Voters, close your eyes and visualize a similar scary moment and listen for these words, 'President John Kerry will now take the oath of office'. Words like that should send chills up and down your spine." And, to make matters absolutely worse! Can you even imagine how this guy would run the business of this country after waking up each morning and staring first thing at First and Foremost Woman ~ Teresa? Oh, woe are we. Halloween is certainly the right time for scary thoughts as these. Make sure they don't become a reality, vote for our President, George W. Bush.

When Democrats and Liberals talk about the Republicans stealing votes, keeping people from voting and being outright criminals, I take offense.

I am a gun owner, hunter and licensed gun dealer. I don't know how many people out there could pass the scrutiny to become a Federal and State dealer.

I am opposed to political philosophies that want to take away my right to legally own guns. I am appalled by anyone who's record is to be a gun control advocate and uses a photo op to pretend to be an avid hunter and protector of gun rights.

Above all I am a woman, wife, mother and grandmother and I am against abortion. I don't like people who profess to believe in their religion but still believe in abortion when their church opposes it. There's abstinence, birth control or adoption. Just ask people who have been unable to have children on their own.

I am a small business owner and not in the upper 2% income bracket. We've had some struggles the past 2 years but I have the depth of intelligence to realize that 9/11 had a terrible impact on the economy. When it comes to hospitalization, I pay almost $300 a month but I have a choice of the type of care I have. Ever ask the Canadians about their government health care? It's scary!

I'm a tax preparer and I've seen close to 90% of my clients paying lower income taxes the past three years. The only ones paying more are those who've had a major increase in income or lower deductions.

I realize that people have different views but I resent the fact that some people don't respect mine.

I will vote for George W. Bush for President for another four years because in my heart and my mind I know that he is the strong leader we need in these tough times to take care of me, my family, my state and this wonderful country we live in.

To all the people who voted, Thank You. My belief in the silent majority has been strengthened with the enormous turnout of registered voters. I am thrilled that our President won this contest handily but also over-joyed that the greatest country on the face of this earth has again spoken in a civilized manner. A silent and decisive revolution, however, has just occurred and the media pundits and press are now slowly realizing it.

Another hurricane landed in Florida in the form of a Republican tsunami and swept away the last vestige of a stolen 2000 election. A sea of red began flowing over the South and heartland of America as blue became the color mode of a loosing cause. Early and erroneous exit polling was "Dasheled" in the Dakotas and the continuing storm showed the timid the way west.

It took to almost high noon but two men finally gathered on a dusty Nevada street for a final shoot-out. The ragged trail from Columbus was long and arduous but in the Land of the Free, though some may doubt the cause, right will always overcome. George tipped his white hat as a final courtesy and in a flash fired a shot for Freedom that again will be heard around the world. The Liberal, the looser the liar the left leaning lexicons of libel now lay at his feet. For this opponent a bird in hand was not worth one Bush.